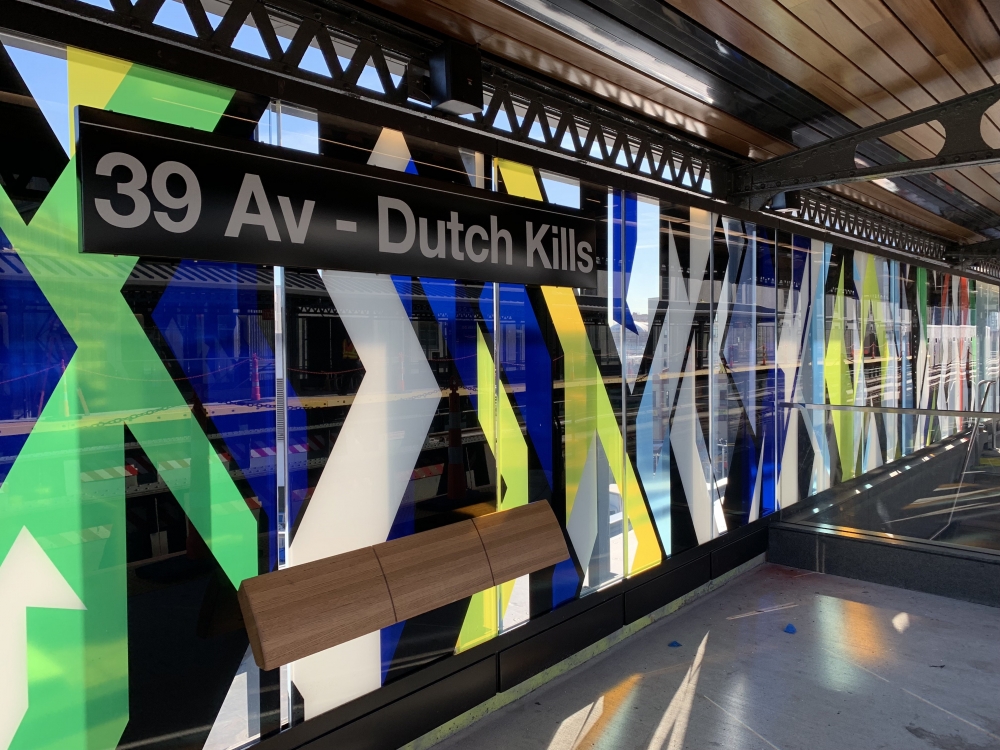 Petzel Gallery is pleased to announce the unveiling of "Hellion Equilibrium," a permanent site-specific installation by artist Sarah Morris. Located at the 39 Avenue station in Long Island City, New York, " Hellion Equilibrium" will open to the public on Monday, January 28, 2019.

"Hellion Equilibrium" (2019) is the first glass artwork by Sarah Morris installed in New York City's Metropolitan Transportation Authority's subway station, serving the city's 8 million residents. The work is two dimensional, utilizing color and transparency incorporating the city itself and the trains that pass through it. "Hellion Equilibrium" is situated on two elevated platforms of the 39th Avenue station and can be seen from the vantage point of the commuters on the train and the neighborhood below. The work creates an evolving spectrum of color that invites the viewer or commuter to consider the concepts of motion and scale through the splintered forms that are part of Morris's original vision of social space.

Throughout her career, Sarah Morris has been fascinated by a wide range of visual references, including American corporate identities, GPS technologies, mapping, graphics and psychology among others.  Her practice has always been interested in systems of movement within the city, whether it be production, commuters, pedestrians, vehicles or currency. Morris will be completing several large-scale public works in 2019, including a work that is the facade of the Miami Beach Convention Center and  the interior of the Toronto Metrolinx Science Center station. Morris's work communicates directional movement where the viewers are implicated in the larger system that is integral to the city and continuously moves beyond it.