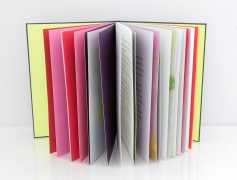 The gallery is pleased to announce the publication of a new limited edition artist book, Nine Flowers, a collaboration between the author Frederic Tuten and the artist Ross Bleckner. Tuten’s ethereal vignettes guide the reader through nine encounters with flowers as weighty subjects throughout his life and around the world, each evoking the mystery and symbolism attached to these temporary living things. Tuten’s texts are accompanied by excerpts from Bleckner’s 7-color screenprint, Untitled. Twenty-six copies of the book, lettered A-Z, include the original screenprint from the edition, signed by the artist. Untitled was printed by Brad Ewing and Marco Lawrence at the Grenfell Press, New York in 2017.

Frederic Tuten grew up in the Bronx and later lived in South America and Paris, where he taught film and literature at the University of Paris 8. He has written about art, literature and film in Art Forum, The New York Times, and Vogue; was an actor in an Alain Resnais movie; taught with Paul Bowles in Morocco; and co-wrote the cult-classic Possession. He has earned three Pushcart Prizes for fiction, an O’Henry Prize for a short story, a PhD in literature, a Guggenheim Fellowship and the Award for Distinguished Writing from the American Academy of Arts and Letters. He is the author of five novels: Tintin in the New World; Tallien: A Brief Romance; Van Gogh’s Bad Café; The Green Hour; and a book of inter-related short stories; Self Portraits: Fictions. His memoir My Young Life was published by Simon & Schuster in March 2019.